BIBLE WAS CHANGED BY SHABIR ALLY vs DAVID WOOD 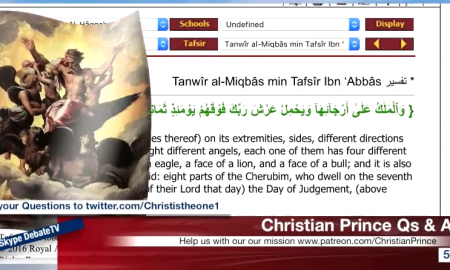 Muslims claim that the bible been changed is that true?
to contact me https://www.patreon.com/ChristianPrince
to read my books http://www.amazon.com/Christian-Prince/e/B008NCTBB6/ref=dp_byline_cont_book_1 Les secrets du prophete arabe
Verily, We did send down the Taurat (Torah) [to Musa (Moses)], therein was guidance and light, by which the Prophets, who submitted themselves to Allah’s Will, judged for the Jews. And the rabbis and the priests [too judged for the Jews by the Taurat (Torah) after those Prophets], for to them was entrusted the protection of Allah’s Book, and they were witnesses thereto. Therefore fear not men but fear Me (O Jews) and sell not My Verses for a miserable price. And whosoever does not judge by what Allah has revealed, such are the Kafirun (i.e. disbelievers – of a lesser degree as they do not act on Allah’s Laws).

(سورة المائدة, Al-Maaida, Chapter #5, Verse #44)
Among the people of the Scripture (Jews and Christians) is he who, if entrusted with a Qintar (a great amount of wealth, etc.), will readily pay it back; and among them there is he who, if entrusted with a single silver coin, will not repay it unless you constantly stand demanding, because they say: “There is no blame on us to betray and take the properties of the illiterates (Arabs).” But they tell a lie against Allah while they know it.

(سورة آل عمران, Aal-i-Imraan, Chapter #3, Verse #75)The likeness of those who were entrusted with the (obligation of the) Taurat (Torah) (i.e. to obey its commandments and to practise its laws), but who subsequently failed in those (obligations), is as the likeness of a donkey which carries huge burdens of books (but understands nothing from them). How bad is the example of people who deny the Ayat (proofs, evidence, verses, signs, revelations) of Allah. And Allah guides not the people who are Zalimun (polytheists, wrong-doers, disbelievers).

(سورة الجمعة, Al-Jumu’a, Chapter #62, Verse #5)
Waraqa died and the Divine Inspiration was also paused for a while and the Prophet (ﷺ) became so sad as we have heard that he intended several times to throw himself from the tops of high mountains and every time he went up the top of a mountain in order to throw himself down, Gabriel would appear before him and say, “O Muhammad! You are indeed Allah’s Messenger (ﷺ) in truth” whereupon his heart would become quiet and he would calm down and would return home. And whenever the period of the coming of the inspiration used to become long, he would do as before, but when he used to reach the top of a mountain, Gabriel would appear before him and say to him what he had said before. (Ibn `Abbas said regarding the meaning of: ‘He it is that Cleaves the daybreak (from the darkness)’ (6.96) that Al-Asbah. means the light of the sun during the day and the light of the moon at night).
http://sunnah.com/bukhari/91/1
It is narrated from Abu Dharr that one day he asked the Messenger of Allah (S): How many prophets are there in all? He replied: One hundred and twenty four thousand. He then asked: How many of them were messenger prophets? He replied: Three hundred thirteen from the above group. He asked: Who was the first of them? He replied: Adam. He asked: Was he a messenger prophet? He replied: Yes, Almighty Allah created him with His own hands and blew His spirit into him. At that moment the Holy Prophet (S) said: O Abu Dharr: )Biharul Anwar, Vol. 11, Pg. 32